I was shocked earlier this evening to learn, almost twenty-four hours after, of the terrorist atrocities in Paris that had occurred yesterday evening. I’d seen the black ribbon on google, read the hover text and wrongly assumed it had already been a year since the Charlie Hebdo attacks. Of course, I realise now that those attacks were in January.

I was about to read some blogs toward a link-up post, the first one I came to in the blogging101 reader tag revealed the news:

I’ve felt quite stunned and lost for words since learning of these latest events, attributed to ISIS. I wonder what our world will become in light of these attacks. What will it mean to be ‘A global society’ and can we possibly actually have such a thing? Does it always have to be ‘us and them’ in one region or another throughout our history and never truly Peace and Goodwill to All Men.

So, my link-up post this evening is mostly to other Paris tribute posts, as that topic has overtaken my reading interests:

https://aladyinadelaide.wordpress.com/2015/11/14/pray-for-paris/ (an image and overlaid quote that have been frequenting the twitter streams, seperately).

https://shafali.wordpress.com/2015/11/14/paris-attacks-terrorist-attack-isis-november-13-2015/ Shafali revisits a drawing she made for a creativity prompt a few weeks ago and coments on the attacks in rhyme, asking “Why?”.

https://dreamingofbigger.wordpress.com/2015/11/13/rescue/ a poem that was probably posted before these events unfolded and I hope it doesn’t seem inappropriate to include this post here: it’s a reminder that in times of tragedy we cannot all be rescued and some of us will be sadly lost; it’s a reminder to spare thoughts and positive actions for survivors, witnesses, families, emergency services and all those immediately traumatised by such atrocious mass murders and terrorist acts.

Last, but by no means least, a very quiet, sensitive and beautiful post, possibly in contemplative reflection, although not specifically stated, but incredibly relevant: https://spiritualdragonfly.wordpress.com/2015/11/14/finding-peace-in-a-chaotic-world

Words really are failing me now, and I’m away to find my own peace in this chaotic world. 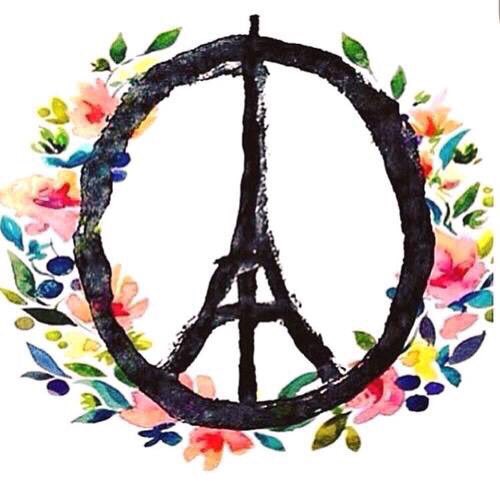 One of my observation excercise results, from my back garden ‘porch’ area on 13th November, 2015 (notes at end):

24 minutes in the day (At) Unseen Sunset

16:13 (4:13pm, GMT) The wind has eased, it’s rush through the trees softer: the breeze is cold, but not icy. The autumn lights of leaf and branch have dimmed to mauves and silvery lemons, greens and greys. Thin smoky ochre wisps of cloud move quickly above the tree line, gathering in the distant East to join the inky-blue grey.

A glint of sunset laden lights hits against a plane so high it can barely be heard –/– just two golden-orange close dashes, disappearing for a moment behind a cloud, reappearing in its journey westward and lost again behind silvery pale of sky that must be the cloak of cloud, both invisible to my eye. The ambient sound remains and fades.

The peace interrupted by screeching tyres from the far bend in the road to my left; the bark of a sounds big dog from about the same way off place. A neighbour’s tumble dryer heard only while the wind drops, silenced again as the wind gathers back with a gusting roar. Voices chattering from behind an open back door. Plates clattering. The pungent waft of heaven-scent herb, making me hungry.

There’s no sign of sunset in my range of view – yet, in parts, the eastward sky reflects its presence in salmony pales. (16:22) Another dull, ambient drone as double-dashed glimpse of distant west-bound plane disappearing beneath cloud and wind. The clouds are more yellow where the sunlight hits them now, inky grey at their outlines and lower midsts. The salmon slivers of sky are fading, just showing through in spaces between the bare branches reaching above where might be the horizon. Day is fading.

(My hands are getting cold). A sporting whistle blown from the field beyond the trees – it’s too soggy for proper field-games, a child playing? There was, just the once, its referee sound. Ruff! from the cul-de-sac backyards over to my right.

(16:27) Next door neighbour’s back door opens: from behind the privacy screen fence sounds the emptying swish of a bucket, the dustbin lid opening and banging closed. A strong waft of dinner cooking smell reaches me as the door is closed. No words of greeting.

There’s suddenly , or so it seems, one creamy white cloud, just behind and above ‘the twin-trees’, but far away in the skyline, as the dull drone of another plane passes, unseen.

(16:30) Cawing – the first bird sound in my presence! A very small dark-coloured plane flies low, to my left, from North toward South, red and white lights of wing-tip in alternating flickers. I was just thinking I must have missed evensong. I wonder how early or late bats circle now – or will they?

My dog senses a cat and runs up and down the garden, stretching and sniffing at the fence, whining – her own first sounds in this play.

(16:33) That big dog bark from left again, as another invisible plane passes westward (by its sound).

I look back to see it’s dark inside the house now – there are no lights in windows yet anywhere along the row. It’s still light enough outside. All along the way you can see the central heating has switched on. Steam vents like dragon breath from their kitchen wall flues. Roar of plane as (my dog) Brandy puddles on the path.

“Unbelievable!” the lady next-door-but-one exclaims from her kitchen. Another plane roars, unseen. (16:36)

NOTES: I’ve only barely edited my hand-written observations for this excercise. there’s no ‘dramatic narrative’, it’s quite mundane but I really enjoyed this piece of writing. From this point of view I sometimes catch some spectacular sunrises – one of them occurs as a photo in this blog that’s been cropped for my header. I’ve no idea if I could have captured a view of a good sunset from the opposite side of the house, because I wasn’t there to see it.

In the moments just before doing this excercise I’d checked the weather forecast, noticed the time of sunset was about to occur. I grabbed my notebook and pen from my table and rushed out to the back garden to obtain a non-visible sunset experience from ‘the wrong place to try and see a sunset’. So, it was completely spontaneous and not a planned way of tackling the assignment excercise.

I’d felt ‘stuck’ for how to approach this task, pondered going out during the day or postponing until my planned evening outing: I procrastinated a lot, until this impulsive point. I felt much better having done ‘something in proper writing’.

Prior to this piece, my ‘writing excercise’  in ‘observing the washing-up’ was made using a voice-memo recorder and needs some extra work, so I appreciated the immediacy of this approach for the piece posted here as it only needed typing and very minor edits. Similarly, my games night coded scrawl needs attention and crafting into something else. Either (or both) of those topics will emerge to be seen at some near future point.